What makes Mr. Darcy so irresistable?

Throughout the years, women have been swooning for Pride and Prejudice‘s Mr. Darcy, even before Colin Firth epitomized him in the role that he was clearly born to play.  But what was it about Mr. Darcy that made him so swoon-worthy? 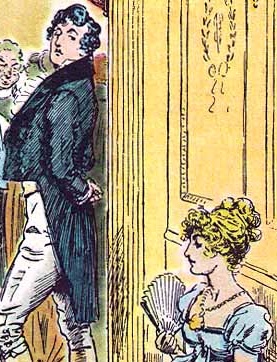 Was it his dark good looks, his heaping 10,000 a year?  Was it his surly, aloof attitude or his natural aristocratic superiority which appealed to these readers?

I would posit that all of these things (or most of them, in my case) do make a case for making Mr. Darcy irresistable to women.  Certainly Caroline Bingley found him desirable due to many or all of these.

But how does a fictional hero appeal to women across two centuries and the seven continents to epitomize the romantic hero?

Mr. Darcy is in clear control of his life, his estates, his family (after that little mishap with Mr. Wickham last year) and has his affairs in order.  Until, that is, he makes the acquaintance of one Miss Elizabeth Bennet.  And it soon becomes apparent that he can think of little else but her.

Darcy had never been so bewitched by any woman as he was by her. He really believed that, were it not for the inferiority of her connexions, he should be in some danger.

He began to feel the danger of paying Elizabeth too much attention.

Finally, once Elizabeth’s time at Netherfield has ended, Darcy realizes that, despite his own warning signs of danger, his feelings have burgeoned.  He makes a last attempt to squelch them by sheer force of will.

Elizabeth had been at Netherfield long enough. She attracted him more than he liked …. He wisely resolved to be particularly careful that no sign of admiration should now escape him, nothing that could elevate her with the hope of influencing his felicity; sensible that if such an idea had been suggested, his behaviour during the last day must have material weight in confirming or crushing it. Steady to his purpose, he scarcely spoke ten words to her through the whole of Saturday, and though they were at one time left by themselves for half an hour, he adhered most conscientiously to his book, and would not even look at her.

He continues to  fight himself constantly–a struggle which, when outlined during his disastrous first proposal to the object of his affections–instills great distaste in her and “with such little effort at civility,” he is rejected.

“In vain have I struggled. It will not do. My feelings will not be repressed.”

He concluded with representing to her the strength of that attachment which, in spite of all his endeavours, he had found impossible to conquer; and with expressing his hope that it would now be rewarded by her acceptance of his hand.

Darcy is a man who has lost control of his heart.  “In vain” he struggles against the direction in which it pulls but he cannot divert his own feelings, no matter how hard he tries.  Even after she humiliates him.  Even after she accuses him of being the villain in Wickham’s story–a most vicious lie she has been led to believe.  Even after her ridiculous younger sister causes scandal and ruin by running off with that same Wickham and lives with him unmarried in London.

By the time the circumstances that bring about the second proposal come around, a lot of water has passed under the bridge between Elizabeth and Darcy, but he still cannot control his heart:  His “affections and wishes [were] unchanged.”

It is this desire–even though it brings about disastrous (though, thankfully temporary) results in his life–that he cannot control.  It is his compelling love for Elizabeth which draws readers to his cause and makes them swoon at the thought of being in Elizabeth’s slippers.

In the most excellent 1995 adaptation, the screen writer, Andrew Davies shows us this conflict within Darcy using various scenes not described in the novel.

One of them shows Darcy vigorously working out with his fencing instructor and claiming, at the end, as he turns towards the camera with a fist closed in determination, “I shall conquer this!  I shall!”

And, of course, not long after, Darcy, riding to his estate and (unknowingly) on an almost-literal collision course with his beloved, he pauses at a pond on his estate to douse his desire with a swim.  This scene has become iconic and one that has haunted Colin Firth for the entirety of his career.  To wit:

Though neither of these scenes were written by Jane Austen, they have become popular as a mechanism for the different medium of film to depict what is going on inside of Darcy.   Jane Austen gave us exquisite prose just to this purpose.

It is this quality:  this honorable man, in control of his destiny, his emotions, and a great deal more, losing control over his own heart which I find so incredibly appealing about Mr. Darcy and why he is a hero for my “all-time romantic hero” scrapbook.

*Bold added in all quotes by me

This site uses Akismet to reduce spam. Learn how your comment data is processed.